16
new
Episode 200: The War Games (Ep 1-3) OR We Lost Over 100 Shovels
Episode 240: Tommy Dreamer The Teenage Witch
I Know What You Podcasted Last Summer EP 32: Ringu (1998)
Episode 33: The X Files and BAXFEG Memories OR The Peeps are Out There
Episode 7: White Claw Taste Test
Episode 199: The Daleks (Ep 5-7) OR One Star, No Goblins
Episode 239: The One Where We Found Out Luchasaurus Isn’t A Dinosaur
I Know What You Podcasted Last Summer EP 31: A Tale Of Two Sisters (2003)
Tornado Tag Radio – Episode 238: The Life Aquatic with Andy Complains
Episode 6: Truth or More Truth
Episode 198: The Daleks (Ep 1-4) OR Please Scream Inside Your Hearts
Episode 197: The Unquiet Dead OR I Ain’t Afraid of No Gelth!
Soundtracks on the Sticks Episode 4 – Persona 4 Golden
Episode 5: BBQ Draft
Episode 32: LEGO Memories OR The Legendary Monorail Transport System
Episode 196: School Reunion OR Happy Slappy Hoodies with ASBOs and Ringtones 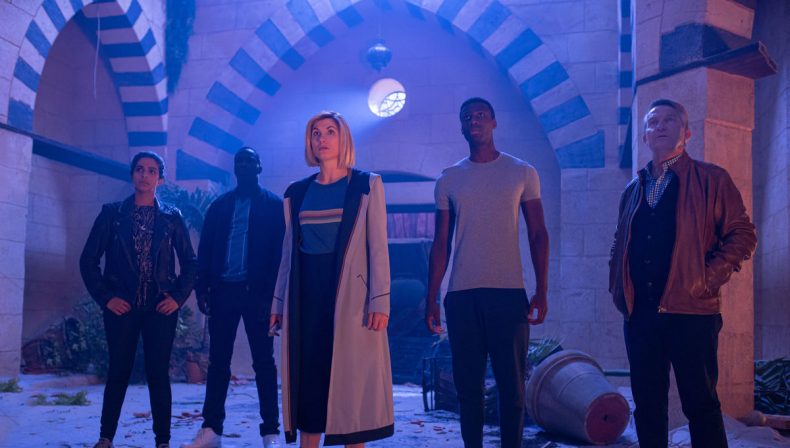 Can You Hear Me? Can you hear me running? Can you hear me running, can you hear me calling you? Yes, it’s a Mike & the Mechanics reference, but we also want to make sure you can hear us talking about the latest episode of Doctor Who: CAN YOU HEAR ME?
From 14th century Syria to modern day Sheffield, an immortal is giving people the worst kind of wet willie and stealing their nightmares! Generally, a good thing…but he’s using them to feed his friend who’s trapped in a crazy bubble! Can Team TARDIS put their finger on the answer, save the day, and defeat the Eternals?!

LINKS
River Song and Capt Jack are Teaming Up for Big Finish
Your Gally1 is Imminent Update
The Season 12 Blu-ray is already getting a re-release
We have our first details of the DVD release of The Faceless Ones!

by Taylor on August 4, 2020
Night of the Living Geeks · Podcastica Episode 200: The War Games (Ep 1-3) OR We Lost Over 100 Shovels Friends, listeners, we have reason to celebrate! Podcastica has reached episode 200!! And what better way to honor this blockbuster number than by [...]

Podcastica: Episode 198: The Daleks (Ep 1-4) OR Please Scream Inside Your Hearts

by Taylor on July 14, 2020
Night of the Living Geeks · Episode 198: The Daleks (Ep 1-4) OR Please Scream Inside Your Hearts The Doctor, Susan, Ian, and Barbara (fresh off their very first adventure together) land on a mysteriously deserted world, but the temptation of exploring a [...]
Comments
Leave a reply