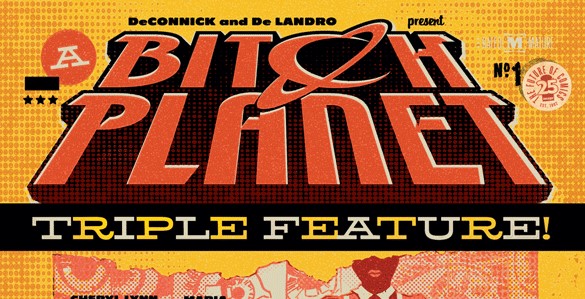 It’s time for another episode of PREVIOUSLY ON, as we return to the world of Kelly Sue Deconnick and Valentine De Landro’s BITCH PLANET. Just like last time, we set out to do a standard Bite-Sized Episode and end up talking for much longer than intended, because this comic gives us FEELINGS (mostly rage).

We run the gamut of pop culture misogyny on this one, from the music industry to the NFL, to politics and office harassment. It’s almost impossible to avoid tangents because every instance of awfulness in the story resonates with us due to the awfulness we have experienced in real life.

Usually we try to keep our show funny and light-hearted but hot damn if this book doesn’t get us riled up good and proper. So grab your favorite full-calorie snack, pour yourself a glass of wine, hug a woman you love, and join us as we try to work through the torrent of feelings inspired by BITCH PLANET: TRIPLE FEATURE #1.

by Beatrice on May 16, 2019
Girls Interrupting and Bam! Pow! TV! teamed up this week to talk about Avengers: Endgame, the latest film from the MCU and the capper of a 22 movie event. Listen in as we discuss this 3 hour behemoth in detail – this is not a spoiler free podcast 😉

by Beatrice on March 21, 2019
Get your engines warmed up kiddos, we’re back to the races with MOTOR CRUSH! Written by Brenden Fletcher and illustrated by Cameron Stewart and Babs Tarr, we’re back to finish up Volume One this week. Dominic Swift loves to race, and hopes [...]

Girls Interrupting: Let’s Get in the Coffin and Save Ourselves

by Beatrice on March 7, 2019
We’re diving back into the gorgeous and terrifying world of MONSTRESS, brought to us by Marjorie Liu and Sana Takeda. This book is a densely-packed dive into a society built on magic, slavery, and brutal control. It should go without saying that the [...]
Comments
Leave a reply